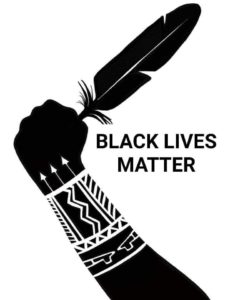 Arresting and prosecuting the police officers AND removing the statues.

Hiring and pay equity for BIPOC workers in every industry AND removing blackface (and redface, brownface, yellowface).

Removing laws and regulations that profile and segregate and support whyt privilege AND ending the use of words that reference and reinforce whyt supremacy.

If you believe that that “angry black man” is dangerous, then you won’t be surprised when so many of them are in prison

If you think that brown people are “lazy,” then it’s okay to pay them less and deny them benefits that “hard working” whyt people “deserve.”

If you cheer that cartoon NDN mascot, then you don’t think there are real Natives living without running water in 2020 because “all the Indians are dead.”

If you think that “bossy” coworker is a “bitch,” then you can’t imagine her being a good manager.  (Or any of *them* being President.)

If you see male actors in dresses playing trans women, then you think trans people aren’t real and that you can kill them for “tricking” you.

The stereotypes and word associations and microaggressions inform and reinforce the behaviors, laws, and unspoken rules that keep the cishet whyt patriarchy in power.

Arguing about what needs to change is another tool they use to keep us infighting instead of coming after them.

Change the laws AND the culture.

We deserve to be seen and treated as equal in ALL aspects of life.

P.S. We don’t need your “whyt savior” narrative either.  We’re not asking you to “save” us, we’re asking you to stop oppressing us and start treating us as humans.